The history of the marble quarries in Carrara stretches back to Ancient Rome. The white and blue-grey marble from the small city in the northernmost region of Tuscany, has been used for sculptures such as Michelangelo’s David and buildings from Pantheon to the modern Opera House in Oslo. The marble, famous for its high quality and beauty, has been quarried here for more than two thousand years.

When you stand on the beaches of Carrara, Massa or as far south as Lido di Camaiore, and look up at the Apuan Alps, it looks like there is snow on top of some of the mountains. But the white sections of the mountain tops are the quarries and the scars of hundreds of years of excavation of the expensive stone. It must have been a difficult feat to transport the heavy marble before modern times. Even now, it is not a job that is without risk. Several workers die each year in accidents in the quarries or during the process of shipping it down the narrow roads on hundreds of trucks. 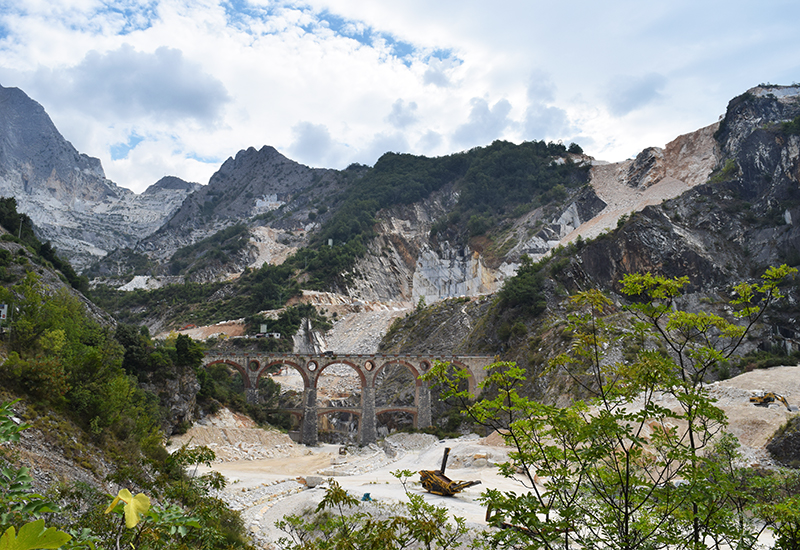 A guided tour to the Carrara marble quarries

This is not a place you just pass by and stop to have a peak at by yourself. It is a busy place with heavy trucks and machinery around every corner. Best to hire a guide to show you around. There are guided tours like Marmo Tours you can join several times a day, and you can find them at a meeting point either at the local parking lot or further up the mountain. When I visited Carrara, I joined forces with a German family who happend to meet a local worker who offered to show us around. Luciano, a proud man from the town, had worked here his entire life. His father had worked here and he had five sons, who all worked in the quarries. Almost all men (they were probably all men) who worked here came from Carrara.

Luciano showed us around the Fantiscritti Quarries in the heart of Carrara. 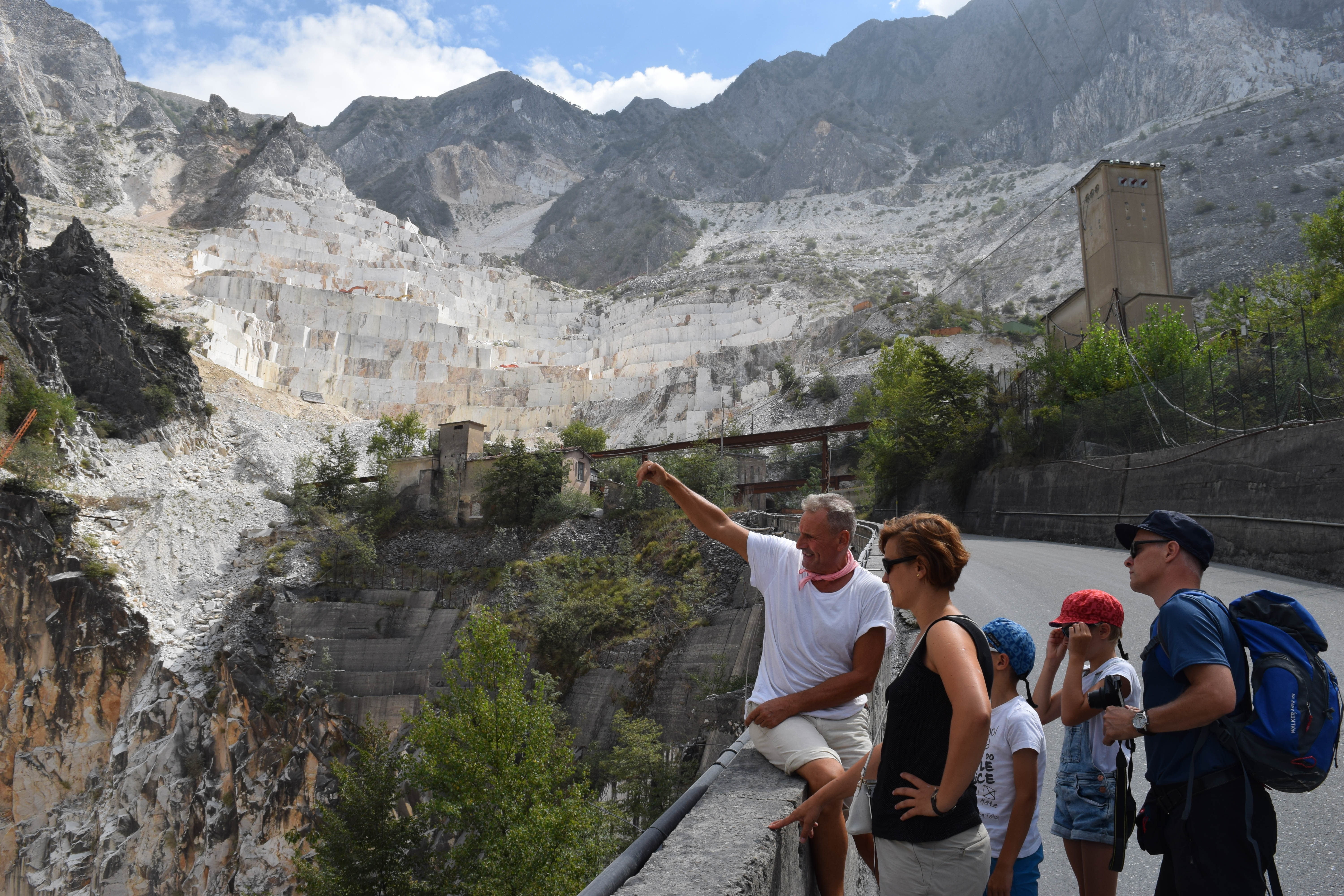 Work in the quarries is hard and it doesn’t pay very well, in spite of the high value of the pristine white stone the men handle. Luciano told us that during their lunch break, the men often ate Lardo, or thick pieces of pork fat, on a slice of bread, with some red wine. Not my first choice of lunch, but that’s how they do it here.

The quality of the marble depends on several factors, like the colour and how many cracks there are. There’s not much left of the high quality marble and today most of it is shipped to Dubai and United Arab Emirates. The marble of lesser quality goes to Russia.

It is an impressive sight to see the quarrymen eat their way into the mountain. The large blocks of marble cut from the ground are called “bancata”. A bancata is a huge block that is split into smaller blocks (that still weigh some 20 tons each) with diamond chains and then the blocks are loaded onto trucks that transport them down the mountain to the harbour of Carrara. These days, almost no cutting or processing of the marble is done locally. Instead, the marble is transported on ships to China where they are processed into floors, sinks or tubs, for example. 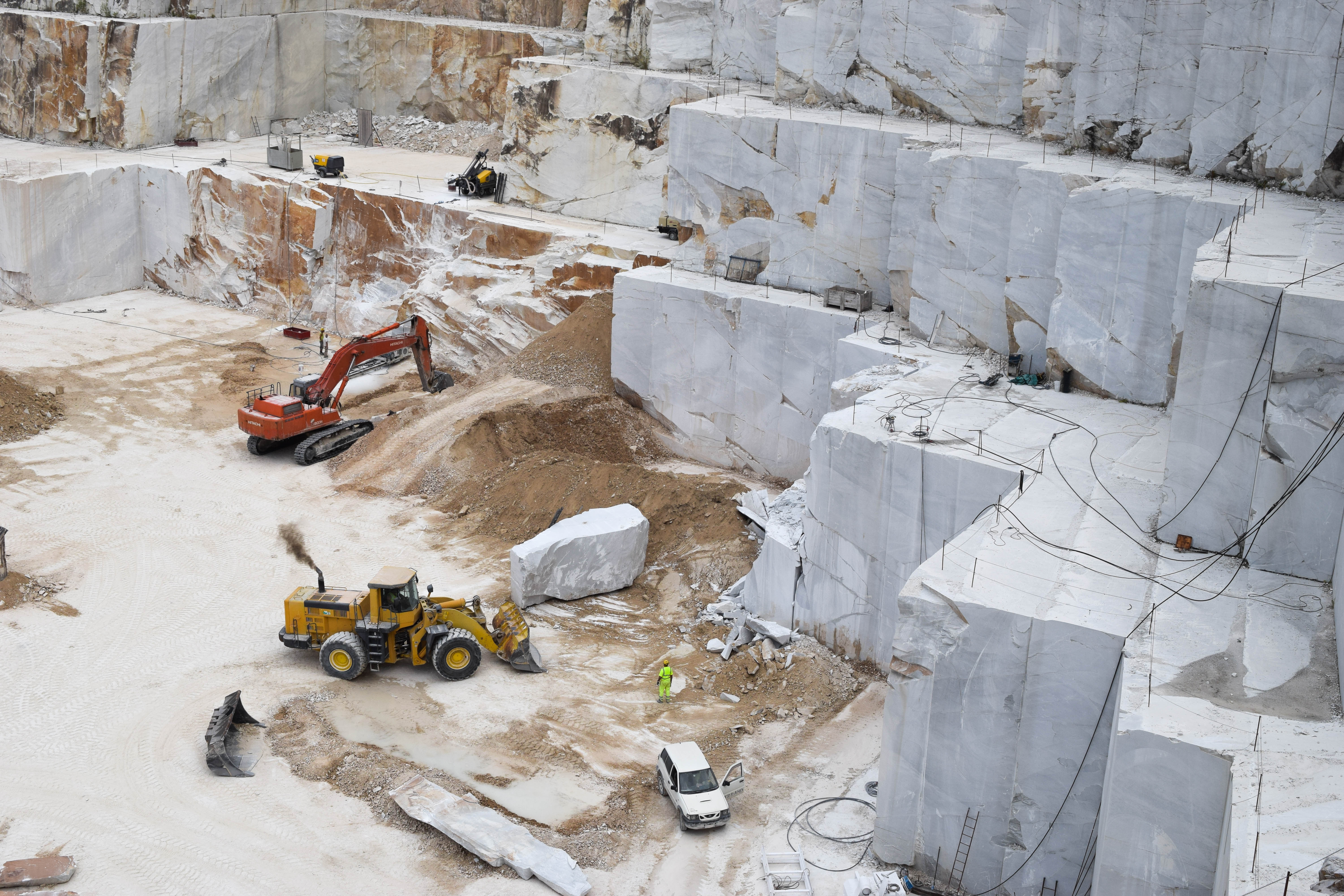 A caravan of trucks race down the mountain with their precious cargo. You don’t want to crash into one of these heavy vehicles. 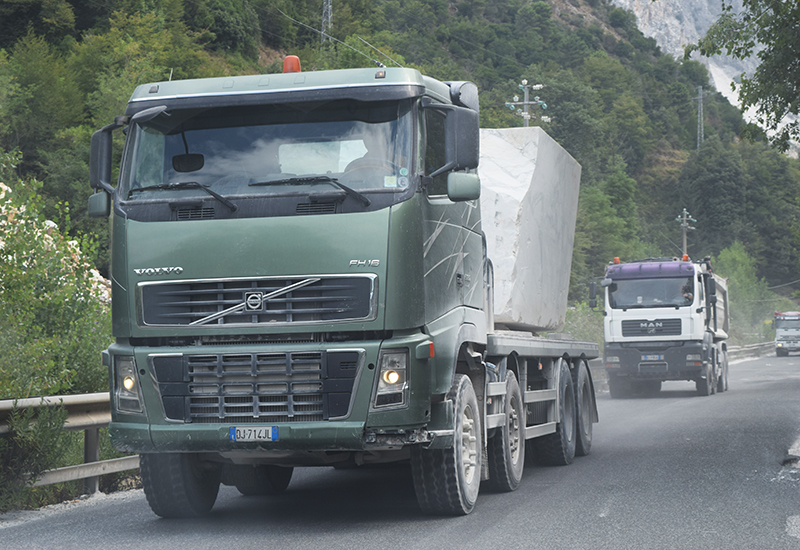 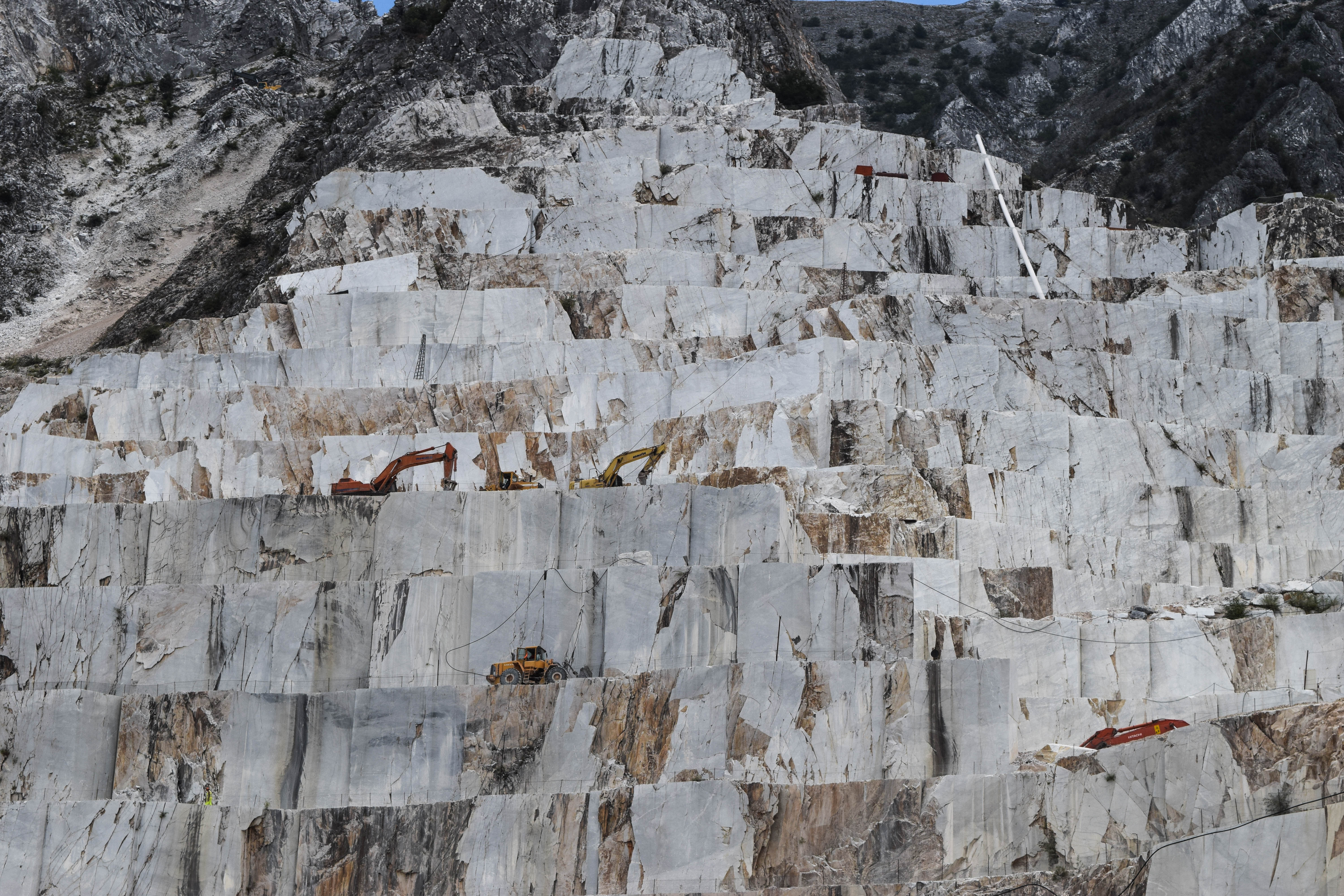 This is a stunning scenery and it is easy to understand why some of the scenes of the James Bond film Quantum of Solace were shot here in 2008.

The only disadvantage of not going with a formal tour, was that we were not allowed to go inside the impressive Ravaccione underground quarry. Well, we drove trough it, but we weren’t allowed to step outside of the car and have a look around.

A little know fact is that apparently only a portion of the marble is used for decoration and sculptures. When there are lots of cracks in the stone the pieces are not of enough quality to be sold. Instead about 75 per cent of the stone that is removed, is ground into calcium carbonate and used as an ingredient in toothpaste.

Carrara marble dust is in your toothpaste!

The future of the quarries is uncertain. Modern methods make excavation quick and we might soon run out of high quality marble. It may still be enough to last a few decades more, but apart from the official quarries, there are also many illegal quarries that compete for the white stone.

If you are visiting the area around Pisa or Lucca for example, I highly recommend taking a trip to Carrara in order to visit the quarries. It is a unique experience that will impress you. If you are into photography, I recommend that you bring a wide angle lense or a GoPro in order to really capture the entire width of the quarry. 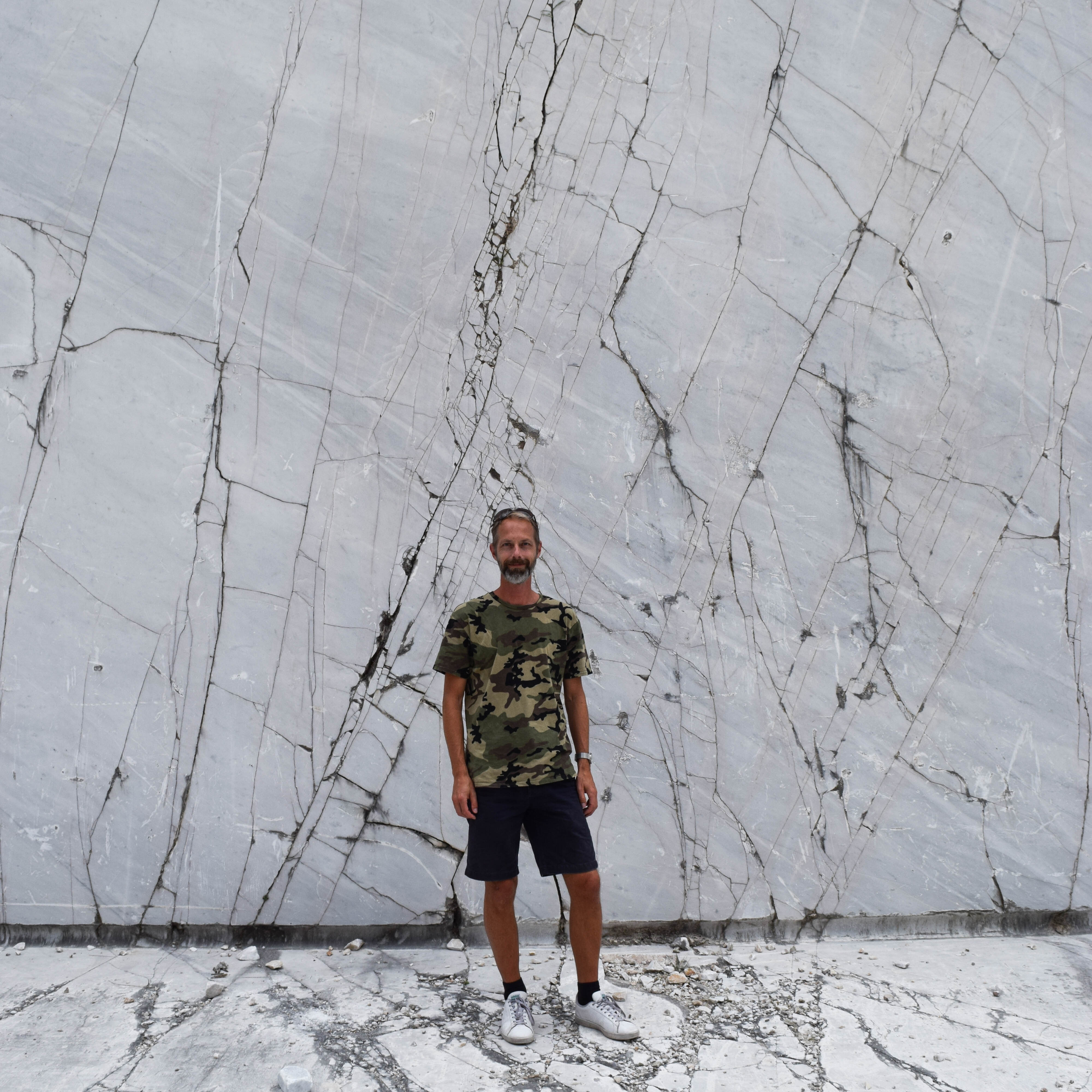 Bonus fact about Carrara, it is the birthplace of one of the greatest football goal keepers of all time, Gigi Buffon.

How to get there

Carrara is situated on the coast of northern Tuscany in Italy, about 1.5 hour drive south of Genoa, or an hour north of Pisa. Follow the signs and drive through the city of Carrara up the mountain to Miseglia. Continue up the road past Ponti di Vara bridge and up until you find the ticket office.

Marmo Tour can be found here. 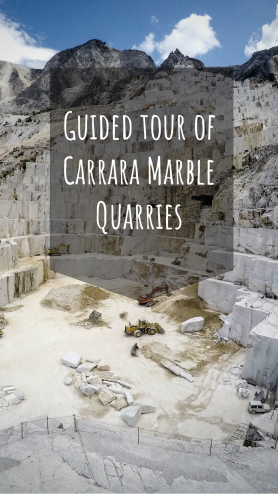