The fate of the ancient Roman city of Pompeii has fascinated me ever since I was a kid and the images of people caught by the ashes made a big impression on me. Pompeii was destroyed by a massive volcanic eruption from Mount Vesuvius in 79 AD and lay completely buried under up to 25 meters of ash right up to the 18th century when it was rediscovered. Gradually, the ruins of the city have been excavated but they are not completely finished yet, parts of the area are still not fully explored.

We visited Naples in Italy a few weeks ago and during our visit we just had to make an trip to Pompeii. It is easy to get from Garibaldi train station in Naples to Pompeii, the journey takes about half an hour. However, it is not very convenient. The trains are often crowded and are often in poor condition. But it is still a trip you must not miss when you are in the area. 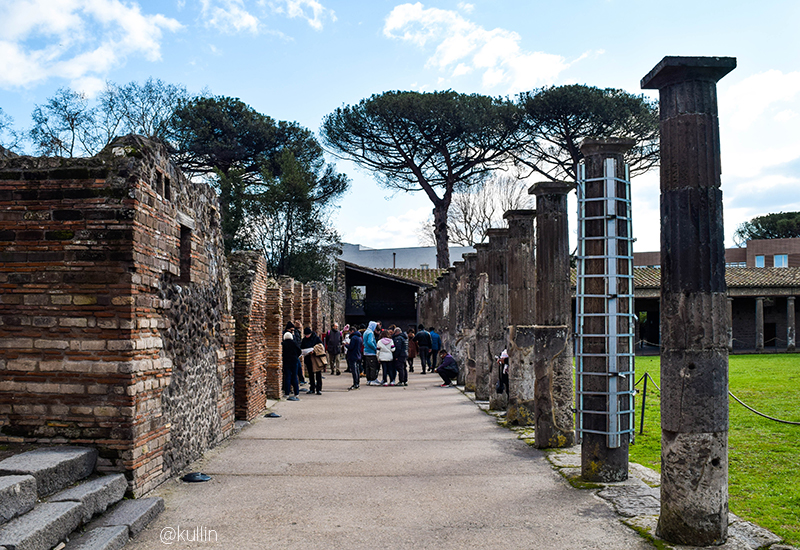 Take a guided tour of Pompeii

I can really recommend booking a guided tour as the area is very large and there is so much detail and historic facts that you miss if you do not have a knowledgeable guide. We booked a tour with the local guide Livio who was very experienced and also spoke good English. The walk took about two hours and Livio took us around to different parts of the city. Of course, you can only see a small part for two hours, but it was quite enough.

Here are a few photos from our guided tour.

Our guide Livio is standing on some large stepping stones that he explained were actually speed bumps. The street was extremely busy and people had horses and rode carts and weren’t very careful. So this is actually a crossing so that pedestrians could safely cross the street.

The streets of Pompeii are well preserved and many structures and buildings are still standing.
It must have been a tiring job to dig everything out of the ashes. 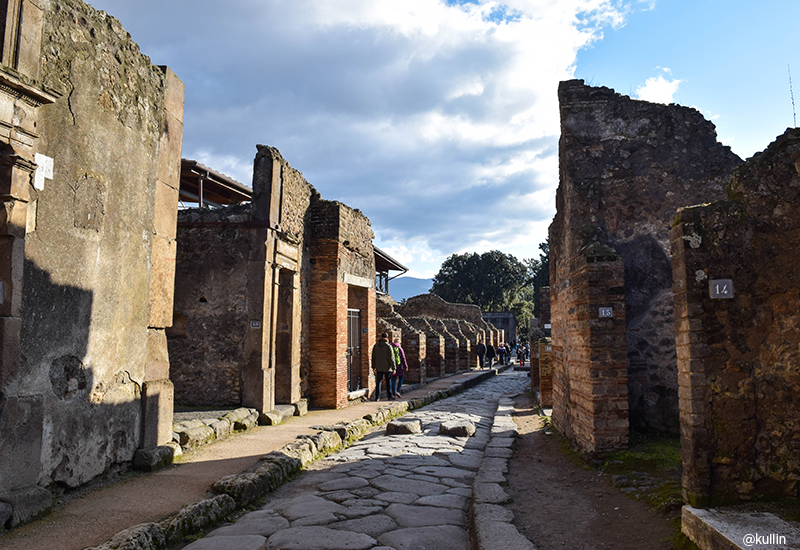 Here is one of the iconic “bodies” of a person who died during the eruption. When they started to explore the forgotten city and found holes in the ground, they made a cast out of some sort of plaster. That is why we could see detailed plaster casts of the citizens of Pompeii. The actual bodies were of course long gone by the time the city was rediscovered. 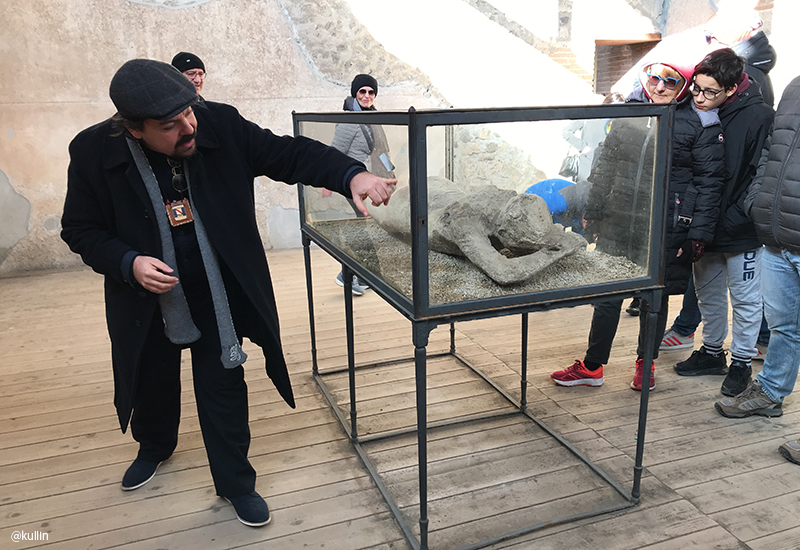 Here are parts of Pompeii with Mount Vesuvius in the background. It’s almost impossible to imagine the horrific scenes when the mountain erupted and started to bury the town with volcanic ash and pumice. In fact, Pompeii was a port city at the time, but after the eruption it is some 5-6 kilometers from the sea. That’s how much volcanic ash that was dumped over the area. 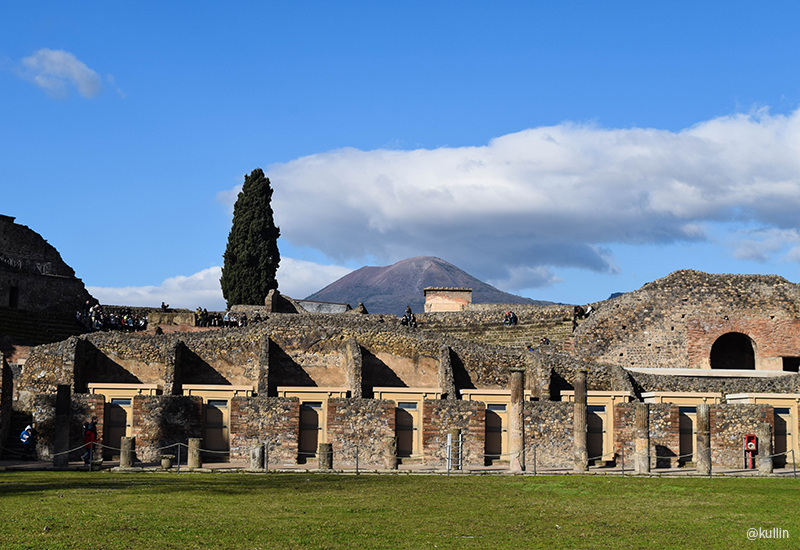 Inside one well preserved house was this room that had a bath inside. This house was owned by a prominent and wealthy family and had multiple rooms, a garden and some sort of reception area where less important citizens could meet up with this important man. Maybe he was some sort of politician. The house also had waiting rooms and depending on your status, you had to wait in different rooms for your turn to get an appointment. 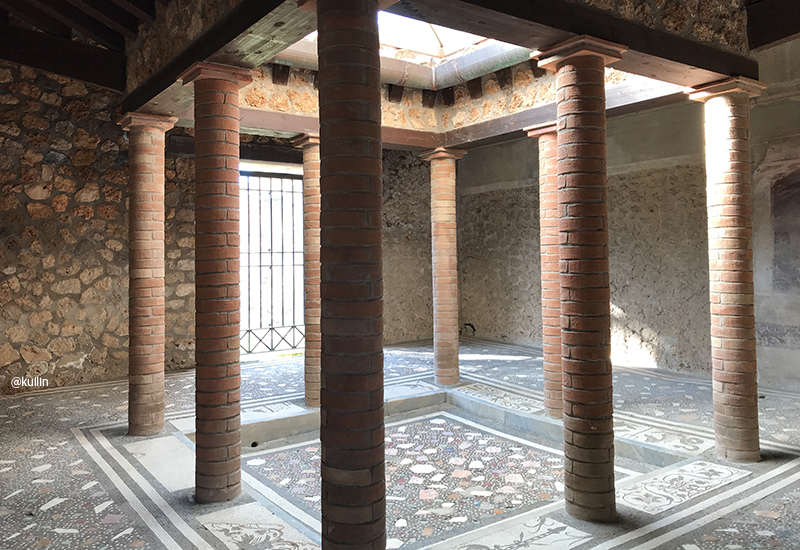 All in all, we had an interesting day in Pompeii and after a well deserved neapolitan pizza, we took the train back to Naples as the sun set over the ocean. 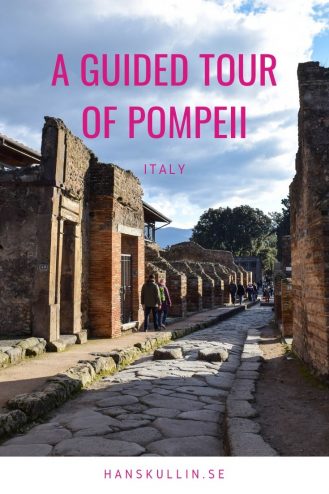